We took a group photo at breakfast. Throughout this journey, people intersect at various times. Aoyama-san and I met the fellow sitting next to me at Micchan’s. Everyday since, I have met him walking along the road. Here he was at our hotel. The young man standing to the right, I met on day 1 at Temple 4. He is from Taiwan and is 24. I was wrong when I wrote that the American, Adam, 33, was the youngest. 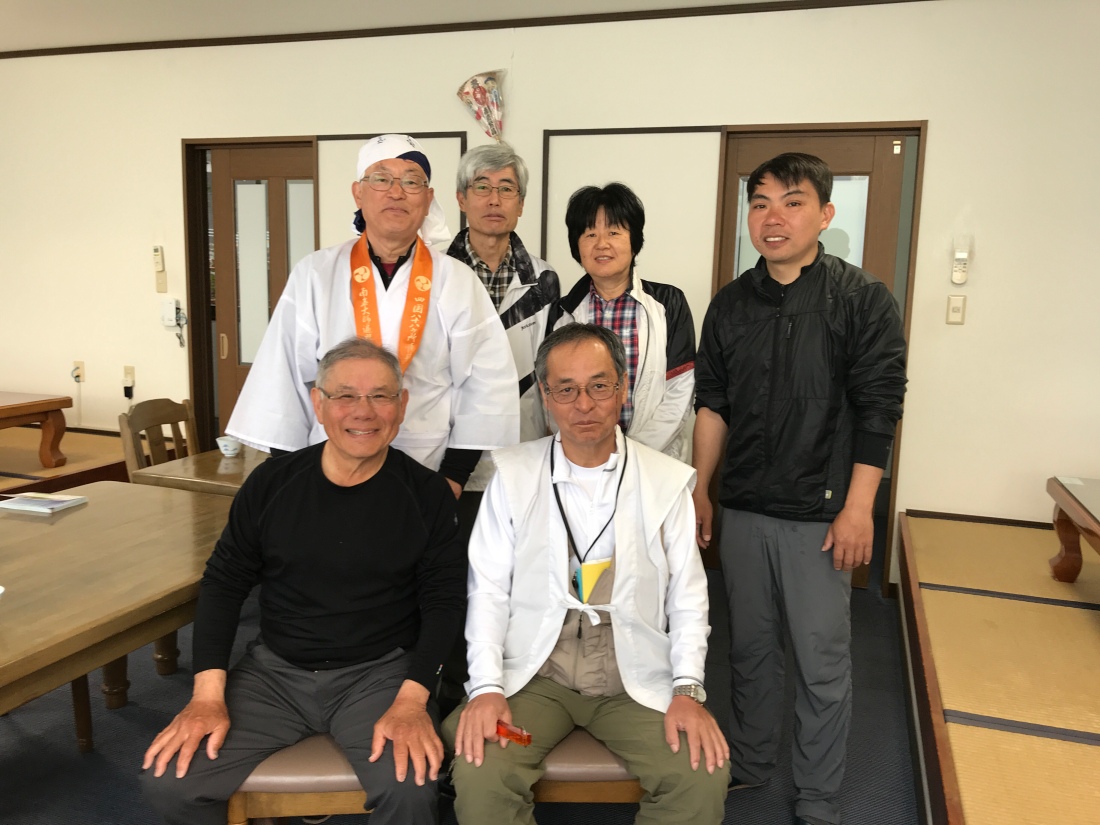 The aruki (walking) ohenro community is smaller than I thought. Aoyama-san found out from an innkeeper that about 500 ohenro complete the 88 temples within one continuous walk or within three months of starting. Another 2000 finish segments that when combined over a period time totals the 88. Thus, very few of the 250,000 ohenro who visit the temples walk the paths between them.

I was very fortunate to have met Aoyama-san. Besides getting first-hand experiences with Japanese people, he has studied the route such that he knows key places not to miss. Today, we missed the turnoff for Shinnen’s home. He is important because he wrote the first guidebook of the pilgrimage in 1687. After checking into our minshuku, we went back by bus to where he lived. A very quiet temple stands on the grounds. Our visit will be one of the highlights of the trip. The place was so peaceful. We were told that only 500 or so people visit each year, mostly on special bus tours. We had our signature book stamped by the family in a village of 12 families now assigned to affix these stamps. 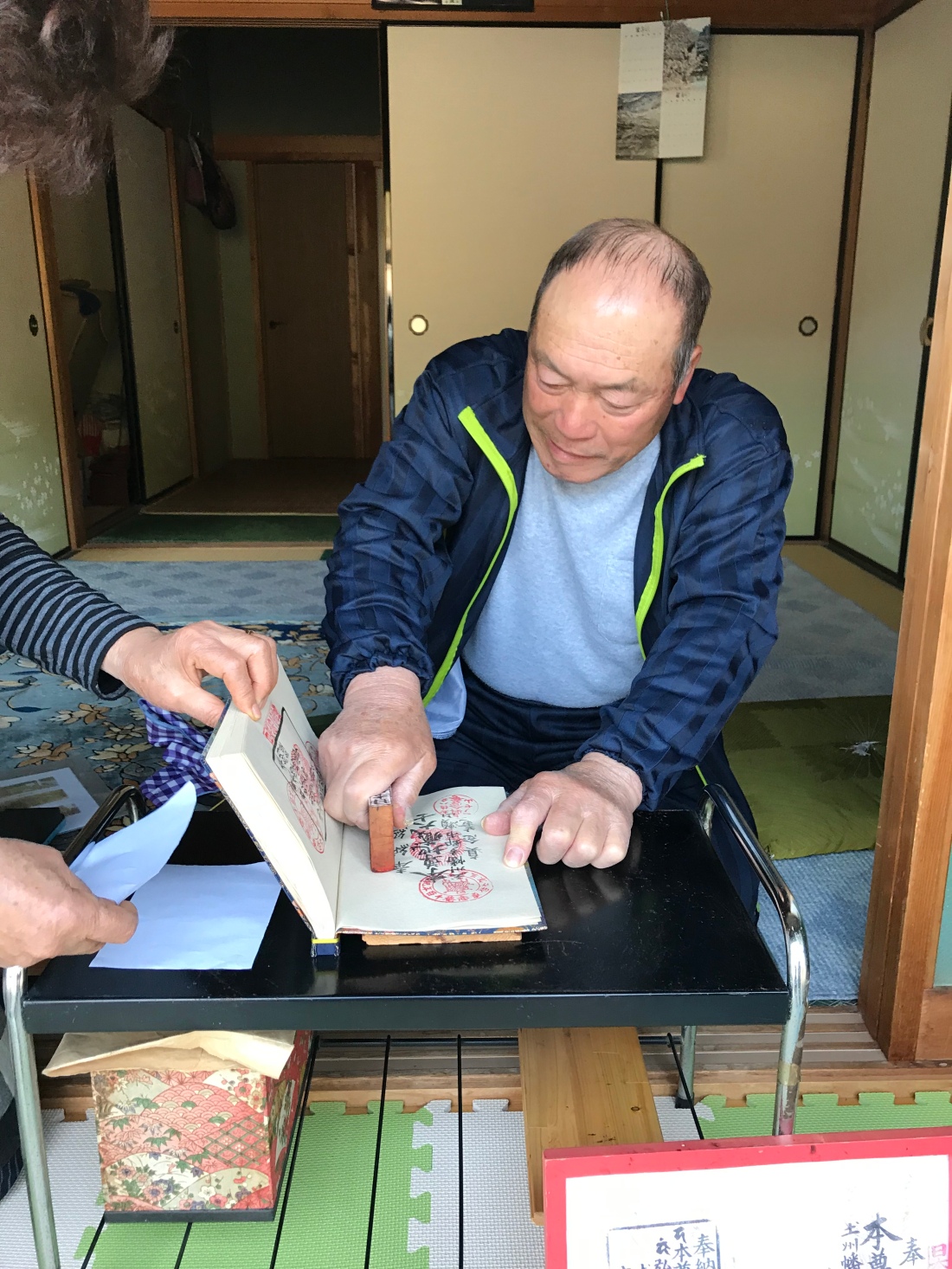 Our day started off going to the train station. We walked down the main road and eventually turned right up a street that led to the station. We were 30 minutes early. About 10 minutes after our arrival, Susan from Long Beach, California appeared. She gave each of us a jar of hot tea and a bag that contained an apple, a sembei (Japanese crackers), and two pieces of chocolate. She saw us and was practicing osettai, showing charity to others.

She now lives in her village farming garlic at the moment. She married a Japanese fellow after meeting him on line. For serious fun, he is a surfer and asked if he could visit her in Long Beach because years before he surfed the area. Voila. Married for five years, she has lived in Japan for the past year and a half. Who could have predicted.

The train ride was very smooth. After getting off, we both had the urge – the most important search and task of the pilgrimage when “on the road.” Here’s what we found and used at the train station.

I also could not resist taking a photo of bicycles racked at the station. See any locks?

We turned to the right out of the station’s parking when a man called out from his car. He pulled over and told us that we were going down the wrong road. We should have turned right again about 50 feet after having left the station. Thank you, sir. You saved us from backtracking about 3 miles! 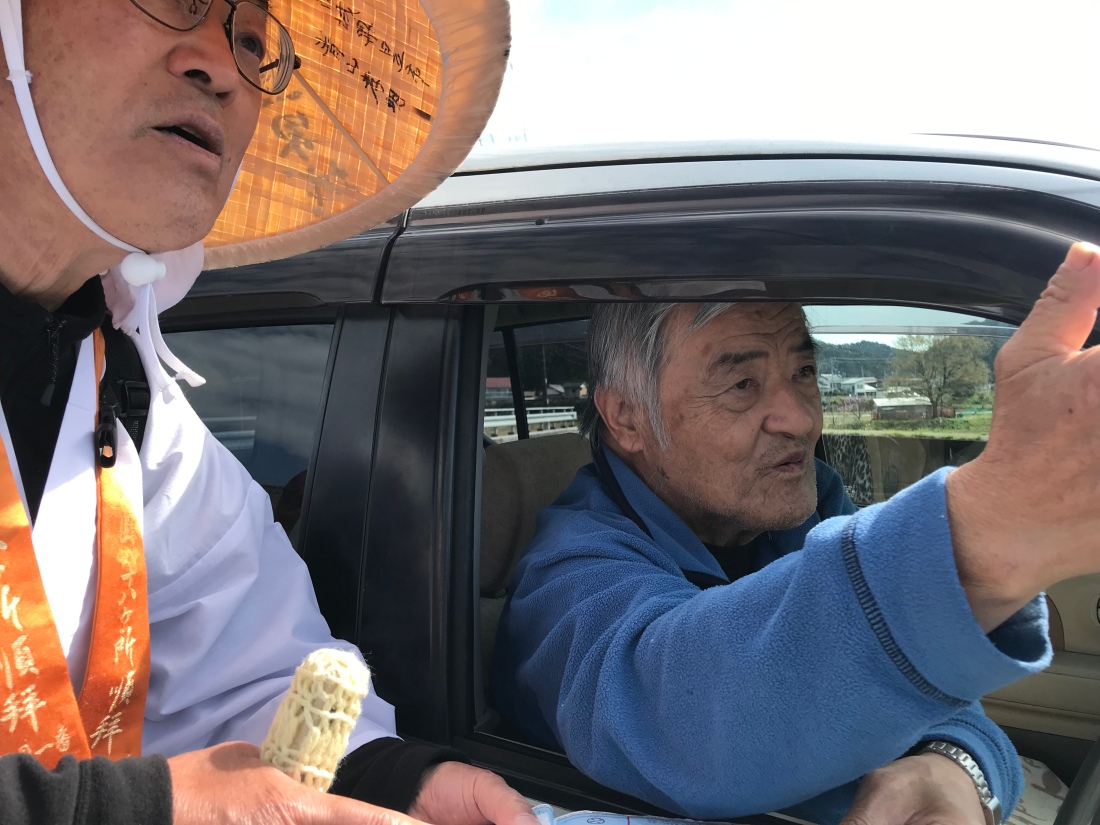 As we crossed the rice paddies, we came upon an embankment. What a beautiful sight – the Shimanto River. An hour later, we passed a class of 1st graders. It was wonderful to see these children. As you may know, Japan is declining in population. Several local schools are closing and consolidating. These children give hope to the future. 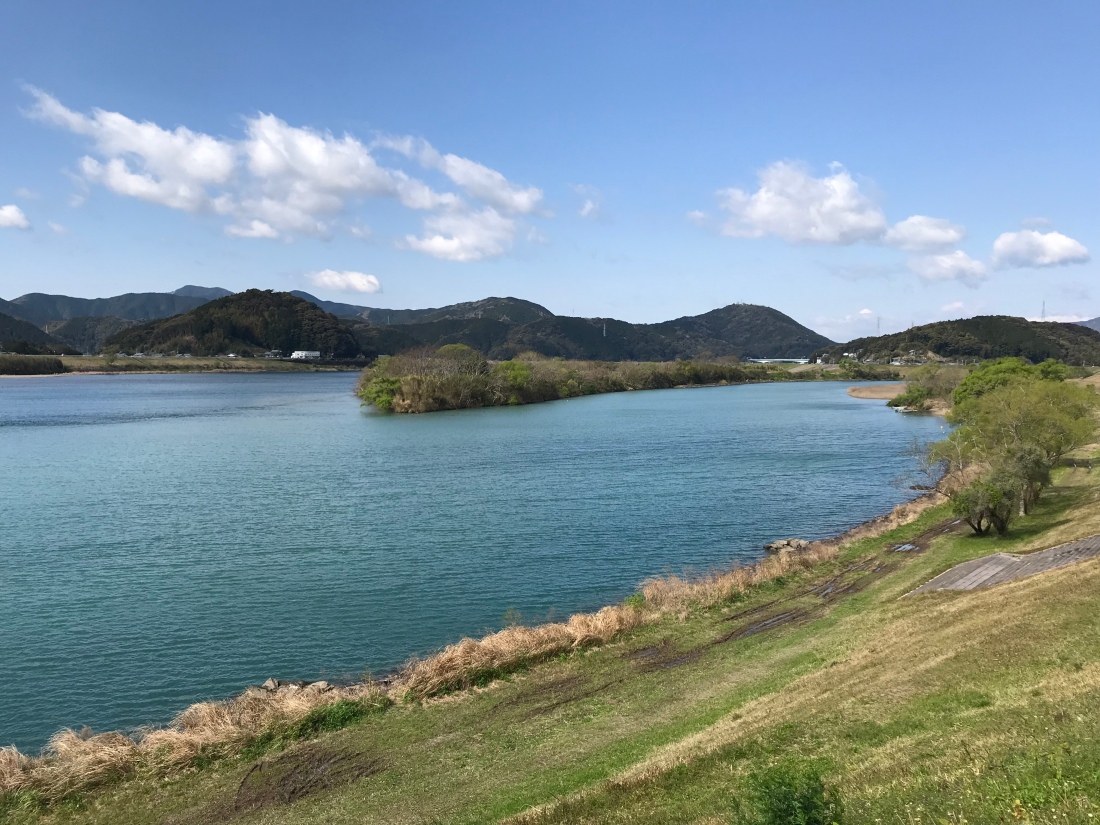 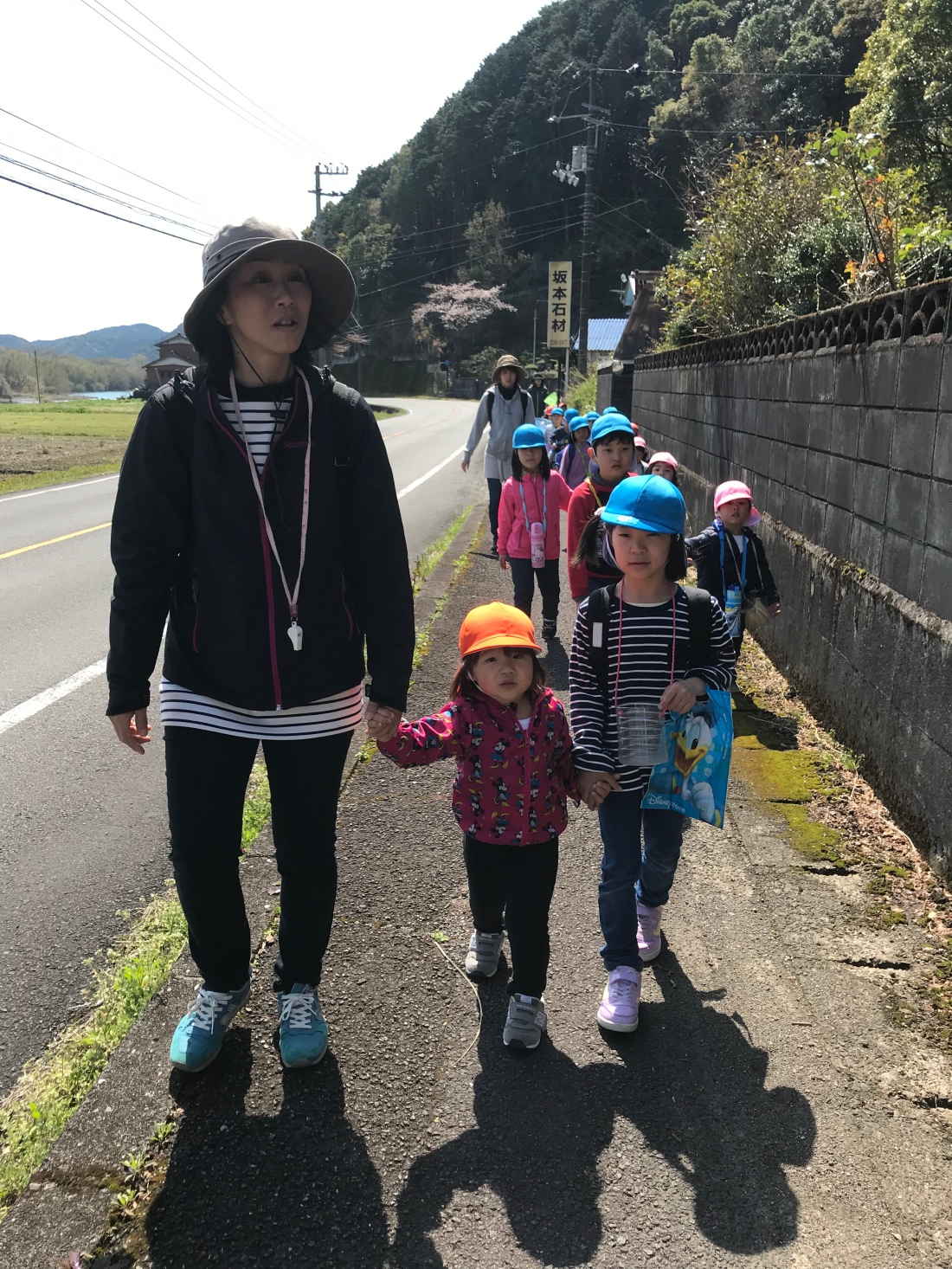 After a bend, we found a place to take our break when the noontime music came from the speakers mounted on a very tall cell tower. In Japan, a song is played at 7 AM, noon, and 5 PM in the towns and villages – modern equivalent of the town caller crying out times in rural Japan.

Aoyama-san said that in Bandō (town where Temple 1 is situated), Beethoven’s Chorus in the fourth movement of the 9th Symphony is played when elementary and high school students are dismissed for the day. I had been looking for a theme song. Here it was – how spot on given what I have experienced and how I feel. An Ode to Joy is how to describe our walks.

I need to end this blog with two notes about food. When we backtracked to Shinnen’s home, the bus stop was in front of a car garage. This place was busy! Just before we got on the bus, a pick-up truck came and stopped. The driver waved at the “boss” of the garage. The driver gave him the first pick of the bamboo shoots’ (takenoko) harvest. I bet that he gets priority the next time he brings his truck in for service.

The other food note concerns adding orange juice to the soy sauce and wasabi mix. Never did that before but apparently that is the custom with this fish – a cousin of my all time favorite, saba, mackerel. 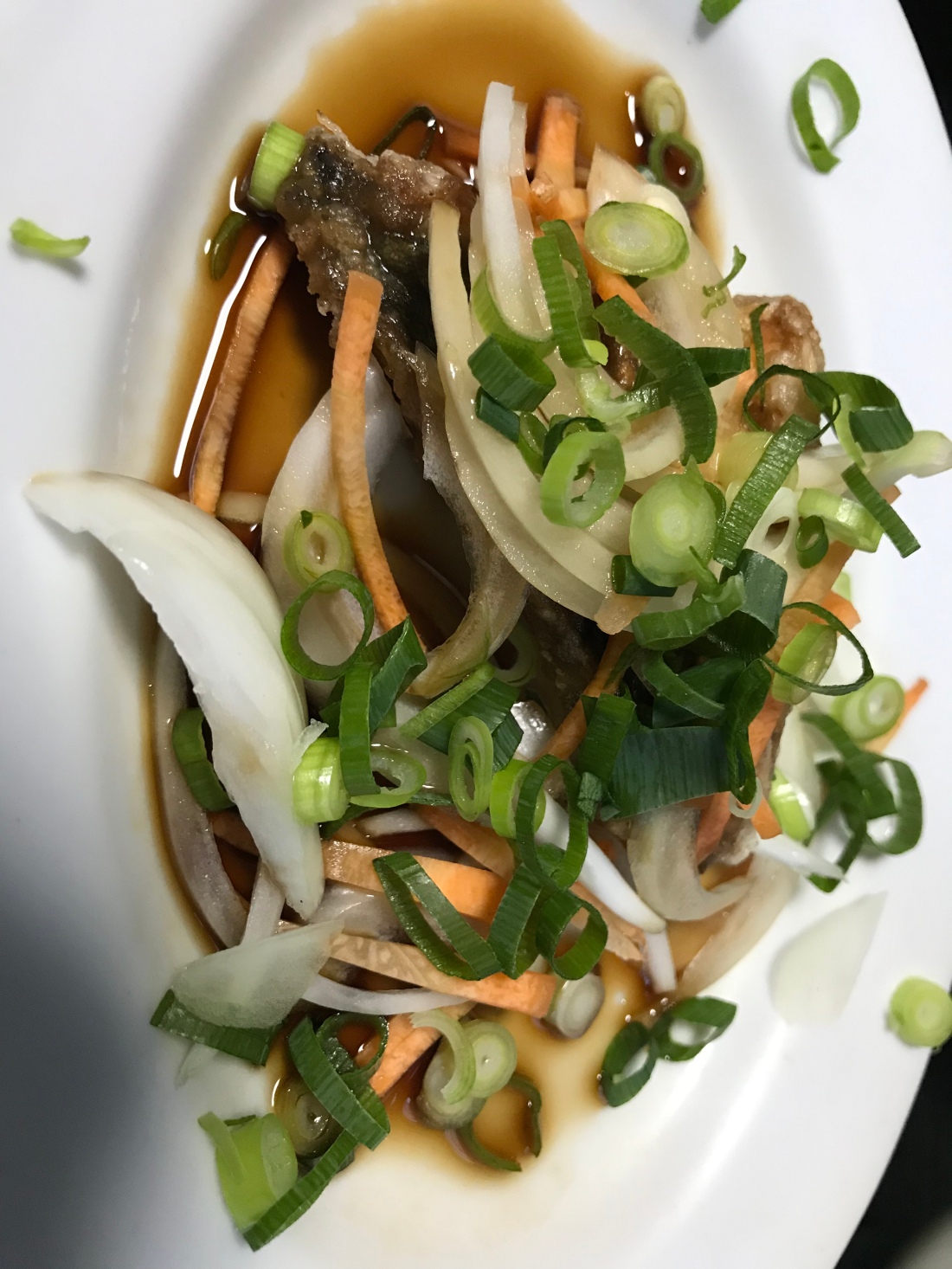