A happy/sad feeling came over me as I neared Temple 86, Shidoji. The journey that I had taken 15 months to prepare for was almost over.

I’ll post several blogs about ohenro after I finish and can let the experiences sink in.

For now, the happiness comes from completing the walk physically, mentally, and spiritually. I feel so privileged to have met other pilgrims, the minshuku hosts, the people who give osettai, and those who said konichiwa as I walked along. I have special feelings for Ayoyama-san, Kondo-san, Monique aka Monica, and Joseph whom I shared many days on the road.

I am happy to have stood at the hondo of 88 temples – places of worship that elicit great devotion among the faithful. I am also amazed at the resilience of these temples. All were founded between the 7th and 8th centuries CE and parts of the buildings where I stepped date from that time.

I am thankful to the pilgrims who have come before me who blazed the trails that I walked. Although difficult, they could not have been as hard as paths when they were trodden decades and centuries ago. I will also be glad to shed the extra 12 pounds that I have carried. Michael, you were right. My camera that feels so light by itself became a heavy stone especially up those steep mountain climbs. Hopefully, some of the images will reward the effort.

I am sad to leave the road with the excitement of what possibilities lie ahead. Each day brought surprises and experiences that can’t be bought. Walking put the moments into slow-motion. I saw details that would have been missed while on a bike, in a car, bus, train, or plane.

I am sad because although I have hiked before, I have never gone this distance and time appreciating nature and our environment. Will I ever hear frogs as I did when I walked around the pond having missed Temple 36 on Day 19? Will I walk along a coastline and feel the wind for as long as I did in Kochi prefecture? Will I hear the sweet spring sounds of the birds as I was walking through the forests of Shikoku?

Those are some of my feelings approaching the walk to Temple 88. Here is the marker in Temple 87 pointing the way with 16.5 km to go. What the marker does not say is that a significant climb of over 2500 feet is included.

I’ll end tonight with two photos of fellow pilgrims. The first met Christine from Paris. We first met at Temple 36 on Day 19 – the same day that I heard the frogs. Later that night, she was at Micchan’s minshuku sharing dinner. We later climbed together to Temple 60 in the rain on Day 38. We said good-bye afterwards but voila we ran into one another as she walked by on Day 40. Here we are together at Day 48. I think that she has come to appreciate sashimi. 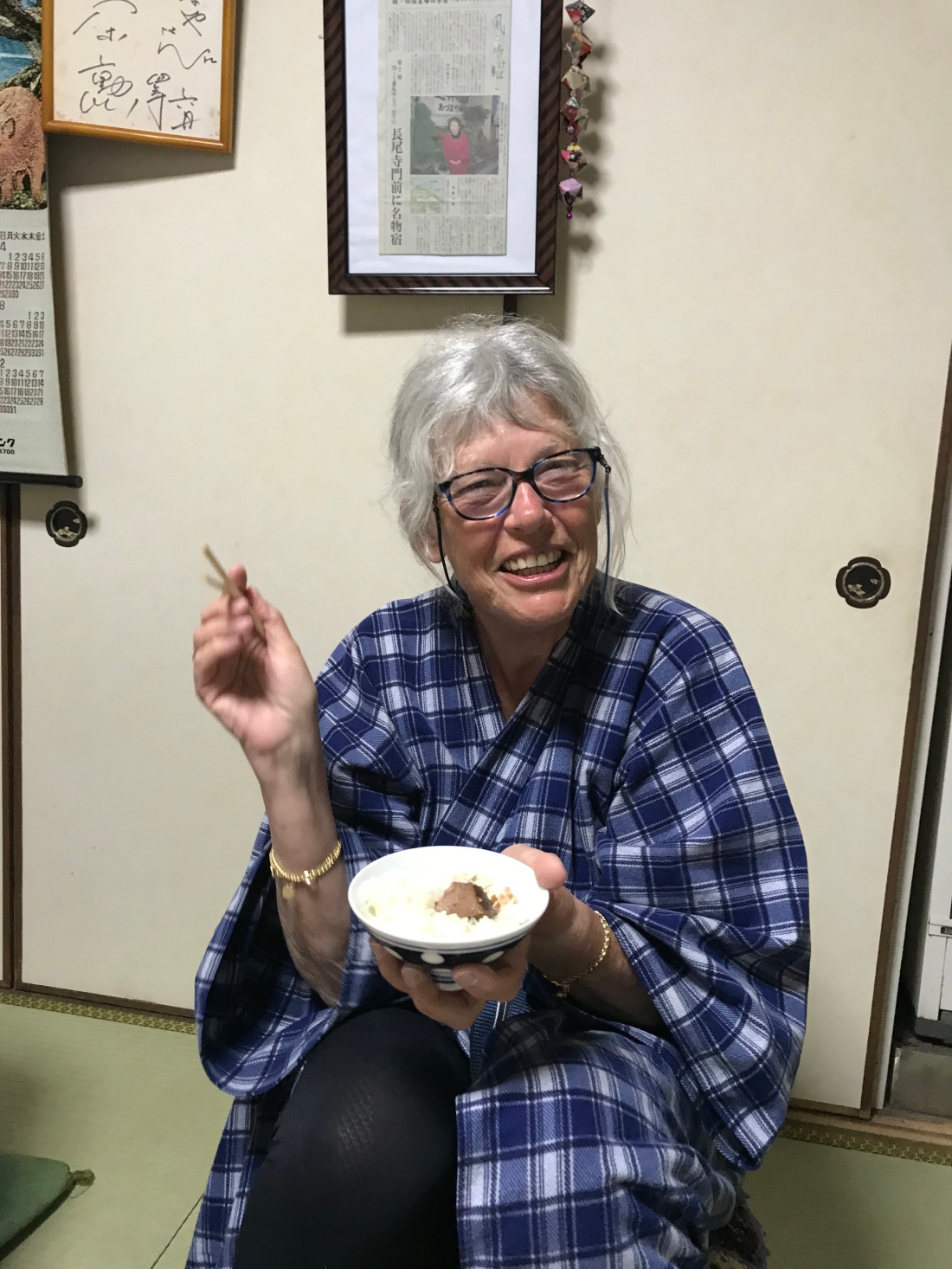 The last photo is of Ueno-san. After fellow ohenro left the dining room, he and I continued talking over a second Asahi. He completed a walking ohenro three years ago and is doing a segment now. He’s 68 and once spent a year at UCLA when he was 20. Our paths could have crossed. After that year, he took a nationwide bus trip by Greyhound. His favorite place was the Blue Note in New York City.

We ended the evening having a kareoke moment singing along with Frank (thank you iPhone) – I did it my way. Thank you Sharon for supporting me from the beginning when I turned to you on Koya-san and said that I was going to do ohenro. 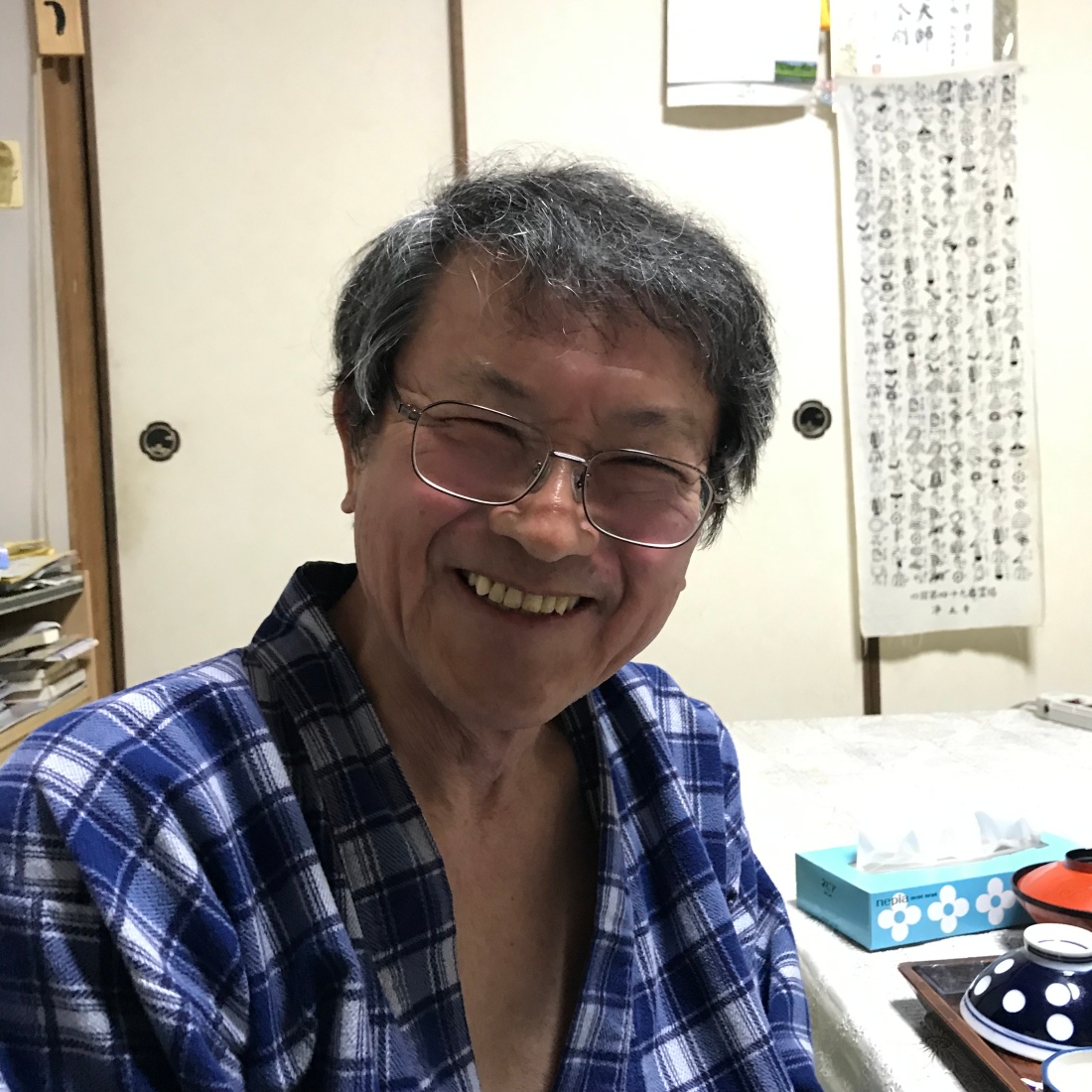