I awoke with the ze cocho (good spirits) feeling. It was time to walk to the 88th and final temple, Okuboji. I looked back on all of the experiences of the past weeks – people met, kindness shown, and entering and leaving 87 previous temples. I was overwhelmed.

Our minshuku host was filled with vigor as we came to breakfast. The eggs she served were larger than jumbo. One filled the palm of my hand. They were all double yolks.

She said good-bye to each of us. She followed custom by waving or bowing at her doorstep until we lost sight of her. She is 89 and as I mentioned before, who will take over when she retires or passes way. 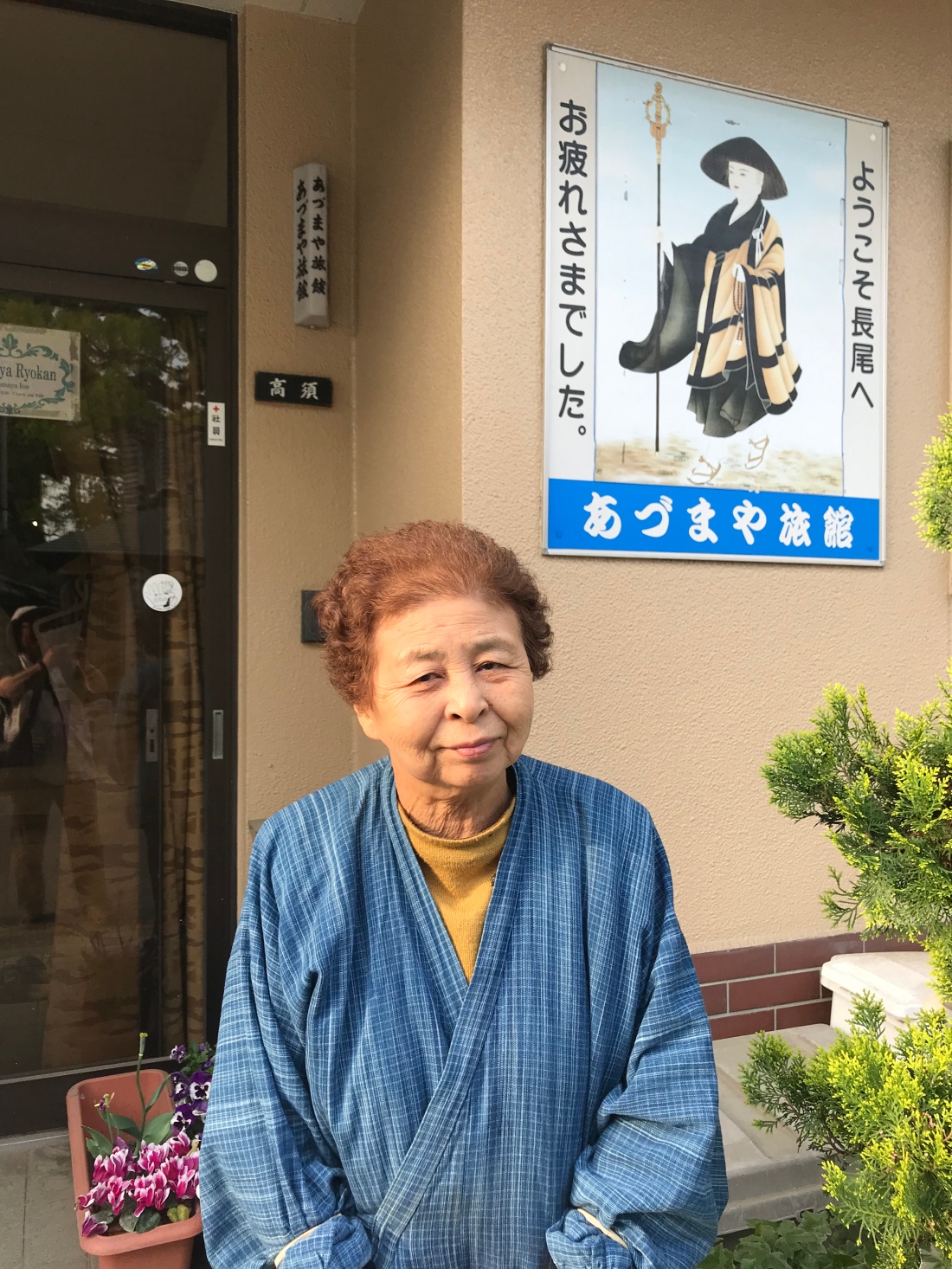 About a third of the way to Temple 88 is the Maeyama Ohenro Koryu Salon. The building is larger than I expected. Besides a large sitting area where pilgrims are offered refreshments, it contains two fairly large exhibition rooms. Copies of old ohenro maps are displayed including Shinnen’s map from 1687.

What captured my attention were original books containing the stamps from the temples dating from the late 1790’s to early 1800’s. The second book shows a page covered in red. Each time a pilgrim comes to a temple, s/he has the book stamped. The first time has the signature of the person representing the temple. The book is only stamped each subsequent time. The second book shows that the pilgrim visited the temple multiple times. 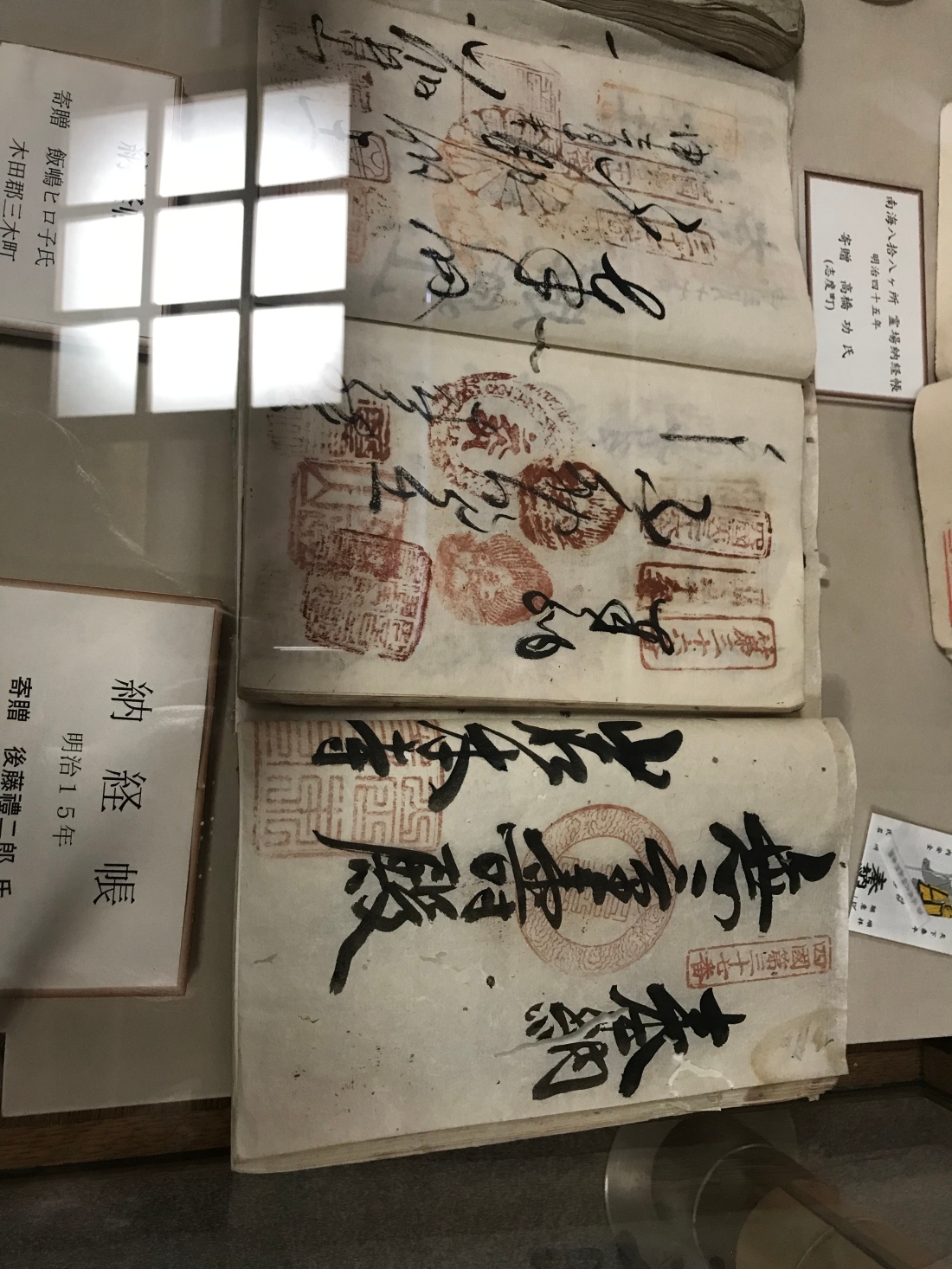 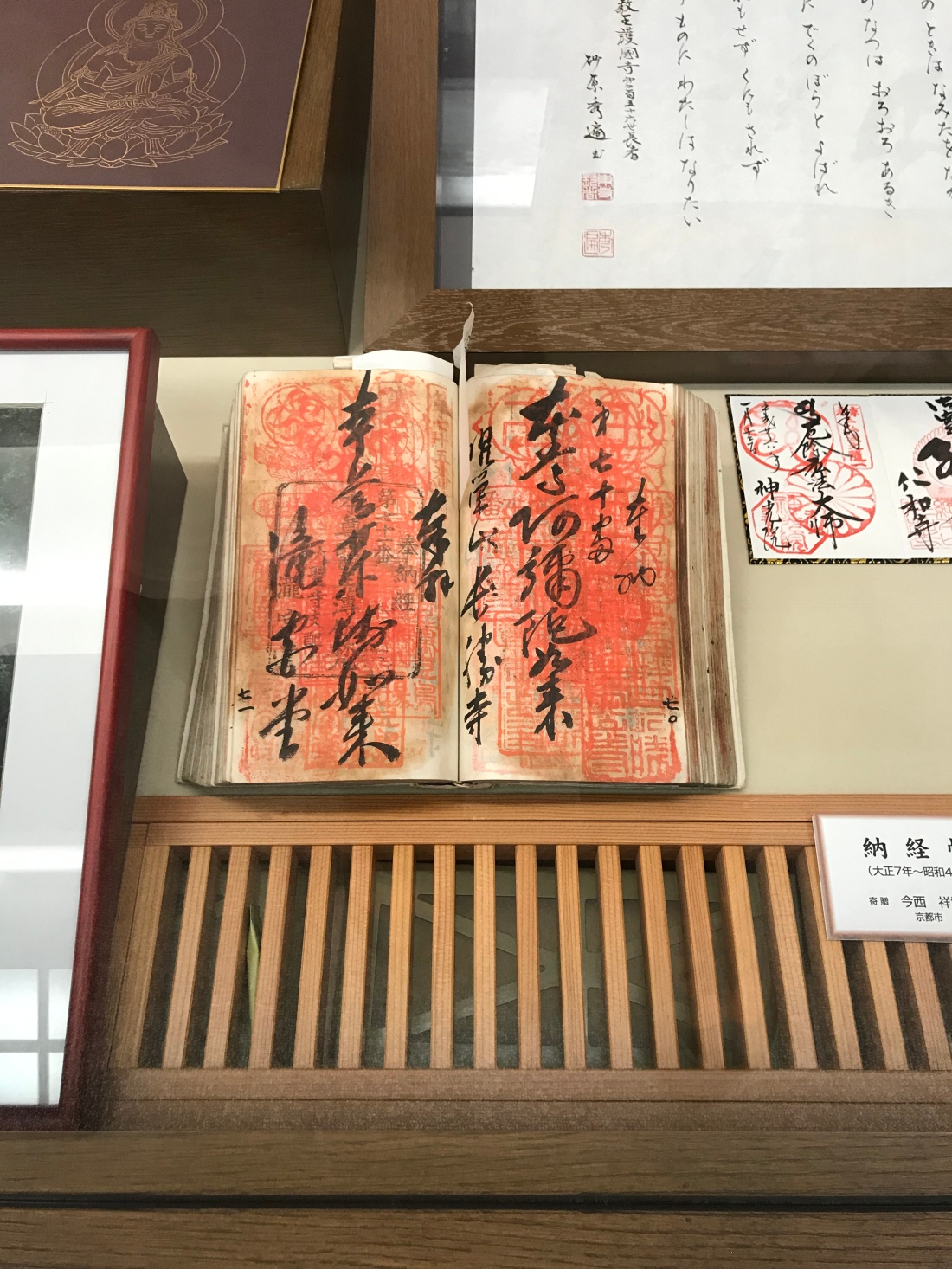 The highest number of known walked complete circuits of the ohenro path is 280. This person took 55 years to do so. Ueno-san and I met a fellow at a marketplace where we were resting who told us that he had made ohenro 183 times though in his car. He gave us his osame-fuda (name slip). Most ohenro have a simple thin slip of paper for their osame-fuda. The Ohenro Salon had examples from over 200 years ago. 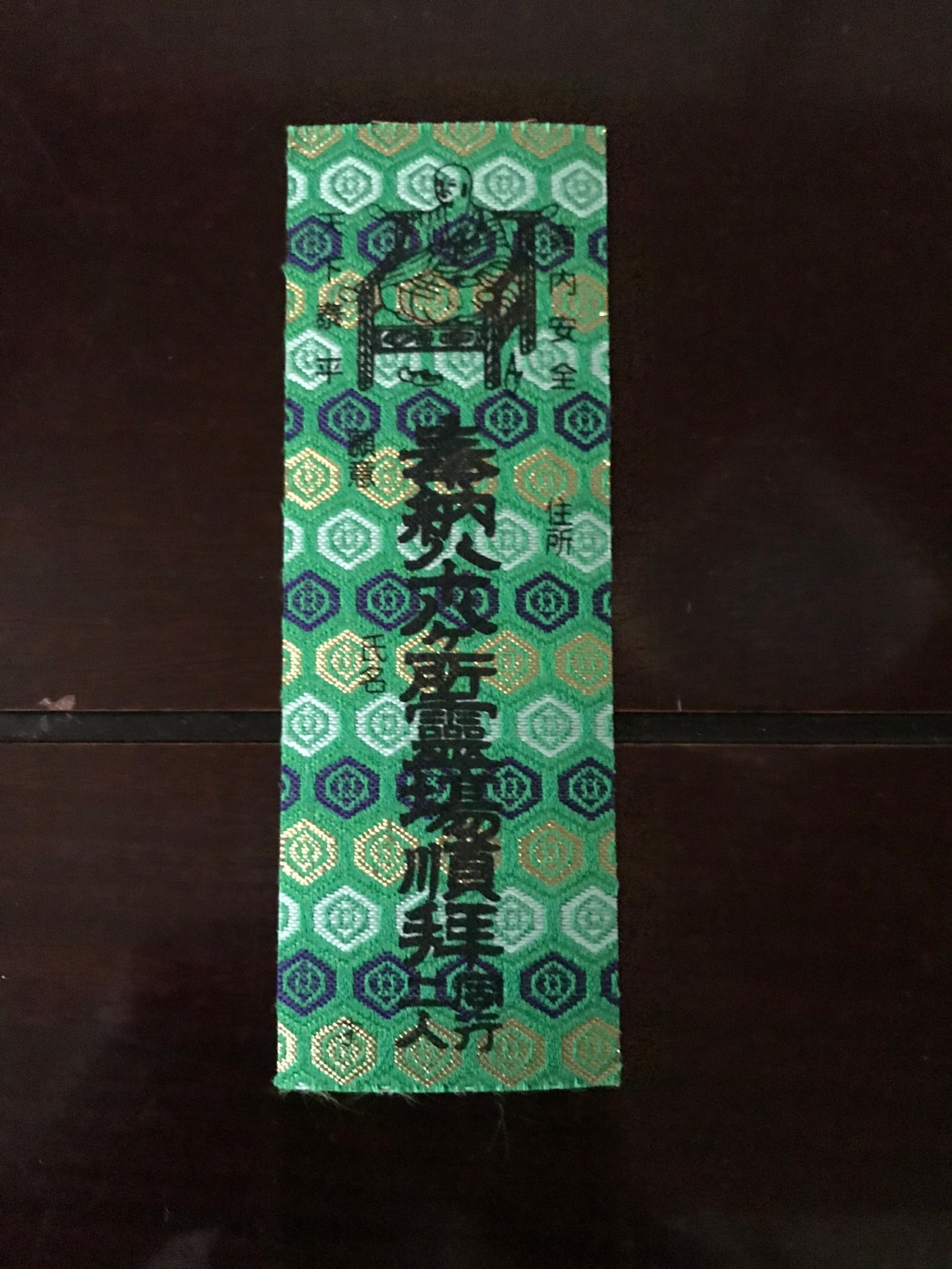 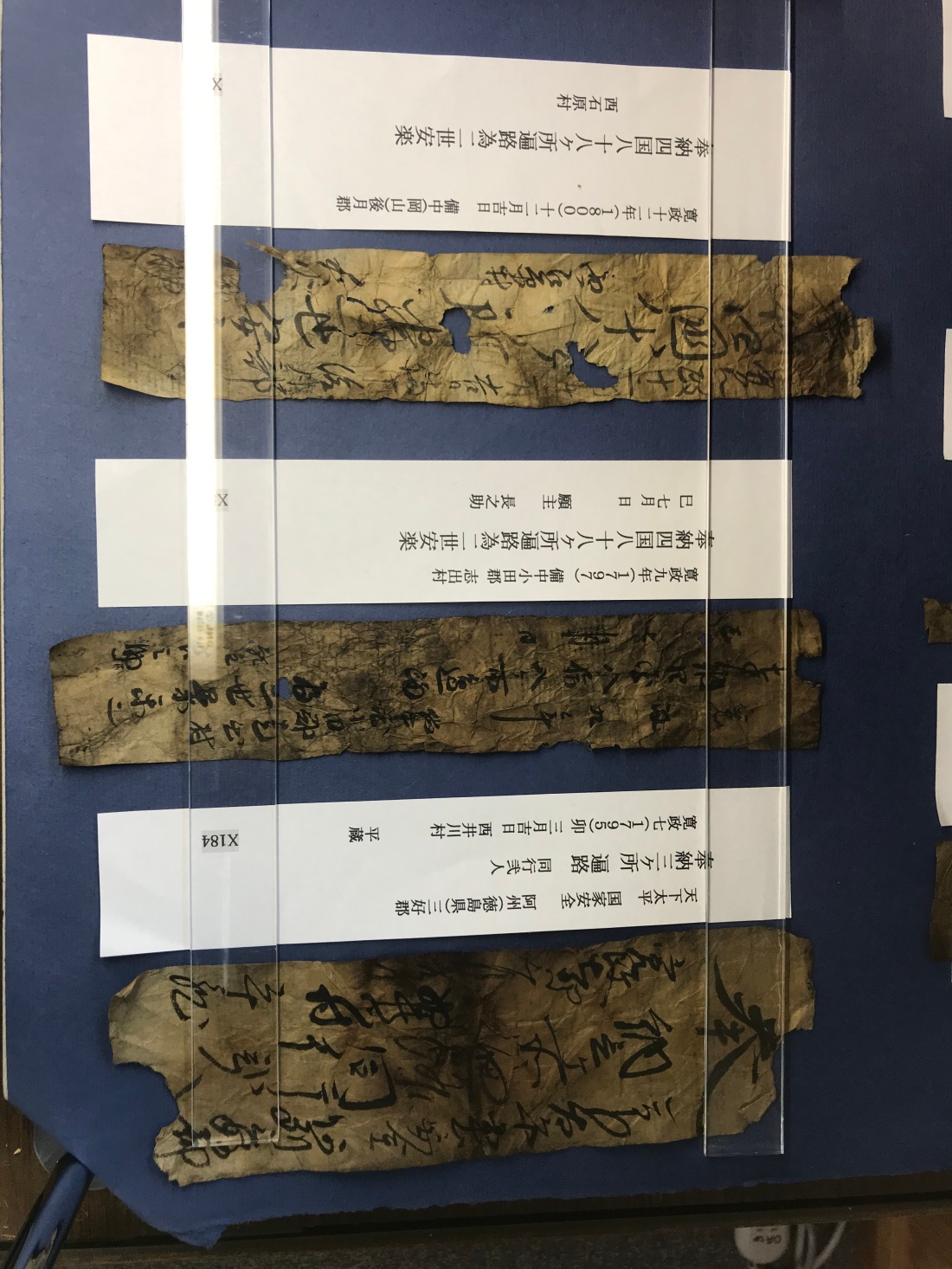 As part of the visit, the Salon issues a certificate naming the person a Henro Ambassador for having walked the 88. I received mine, number 15198. A nice recognition and based on an honor system of your word that you are a walking ohenro who will reach Temple 88.

I met up with Ueno-san at the Salon. We thanked the staff who waved as we began our walk to Okuboji. 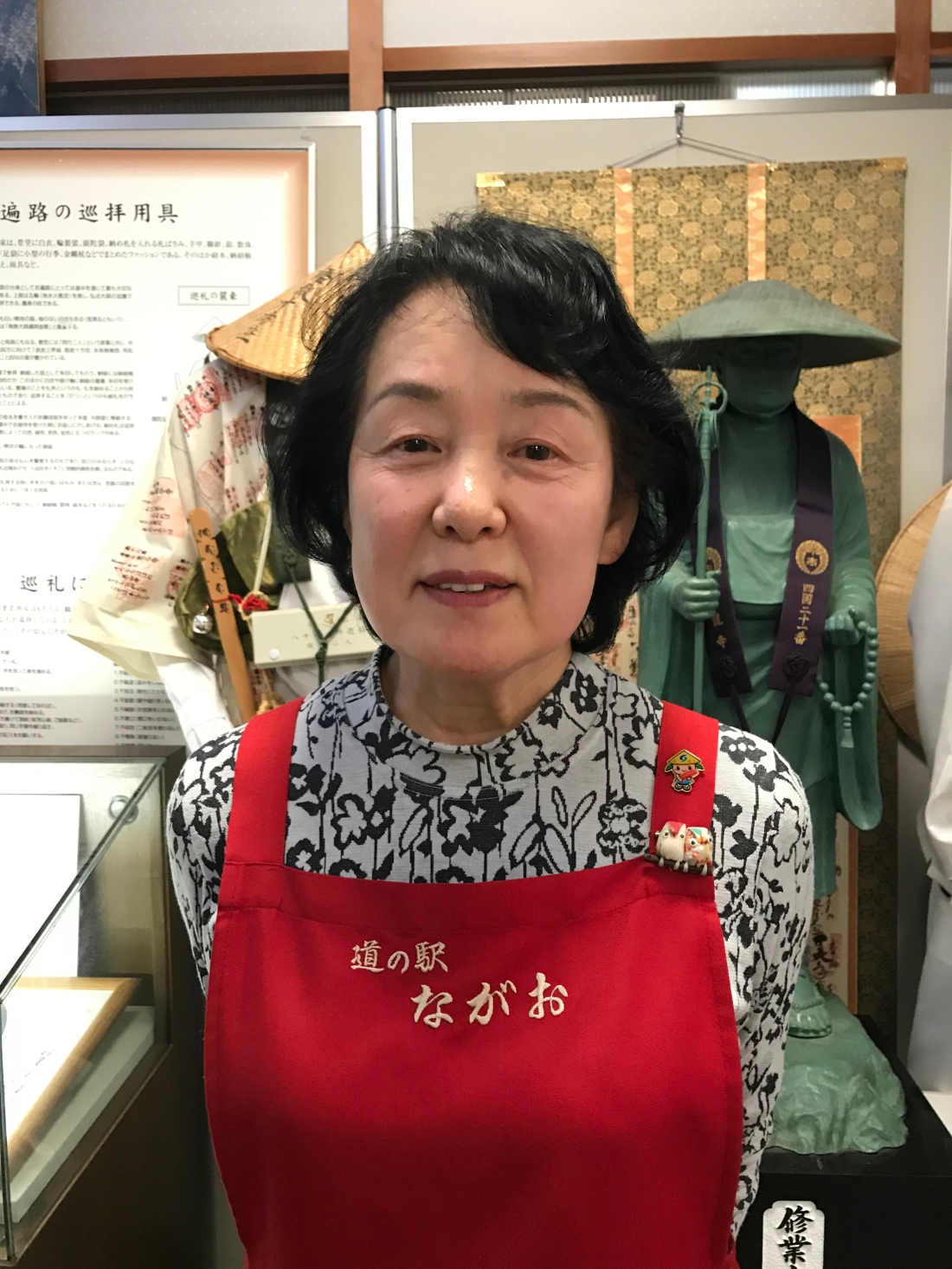 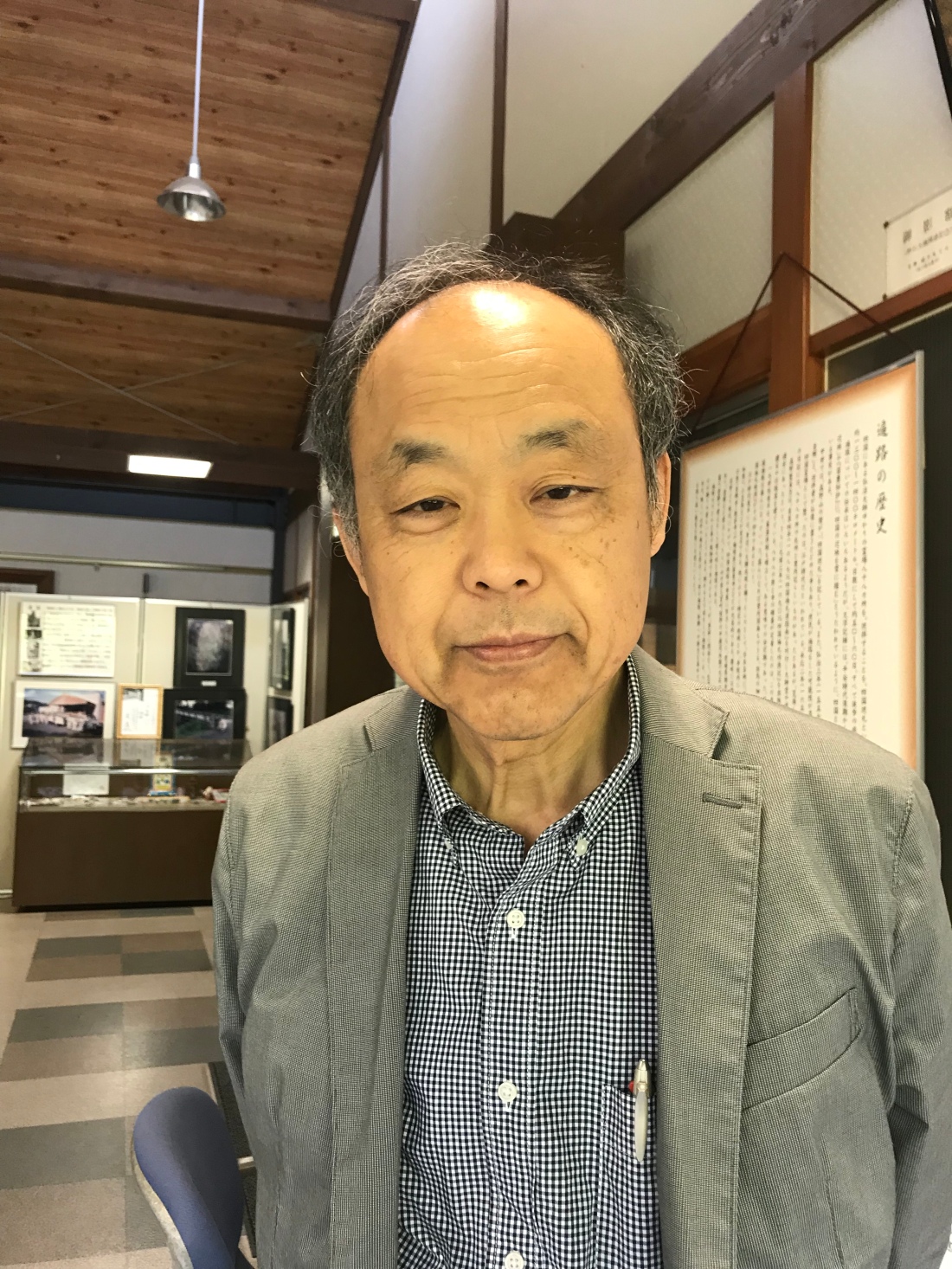 As we bowed before the sanmon, I thought about reaching the finish. Indeed, a moment to enjoy as I passed through the sanmon and rang the temple bell – over two hundred years old.

After climbing more steps (to be expected, no), we saw an enormous metal sculpture of Kukai and the daishou. We discovered that we had come by the back entrance. 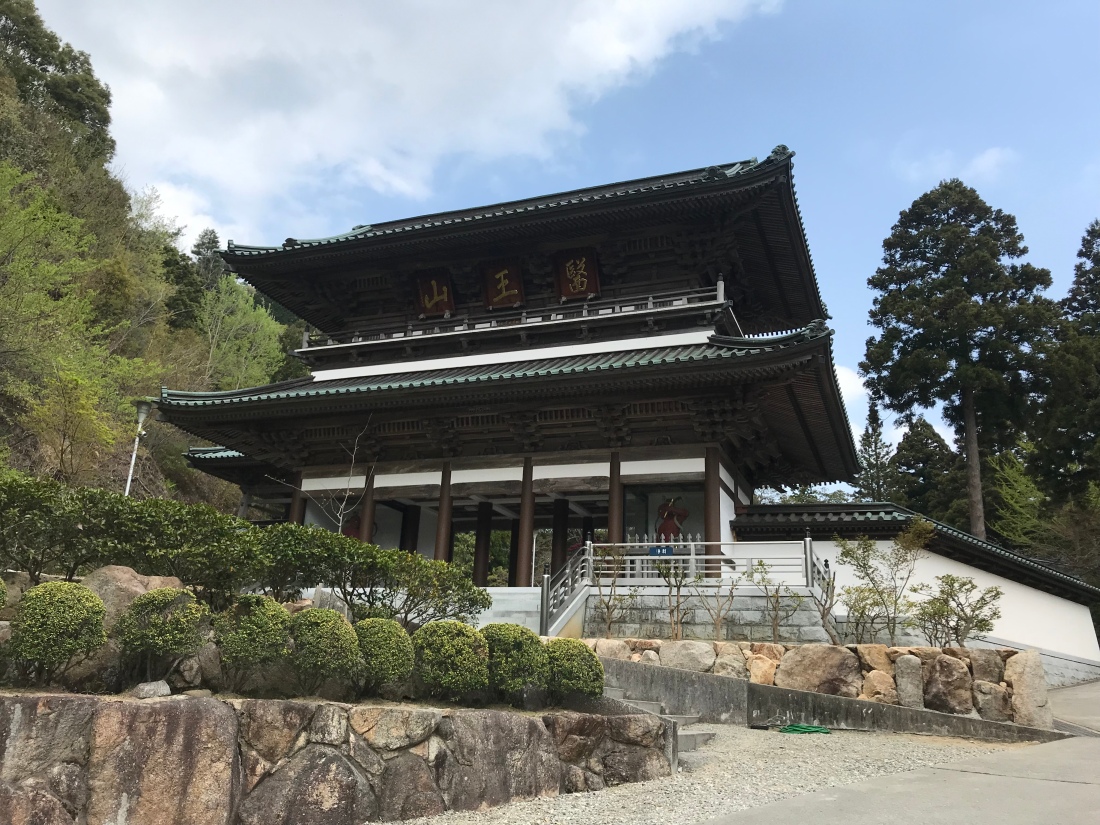 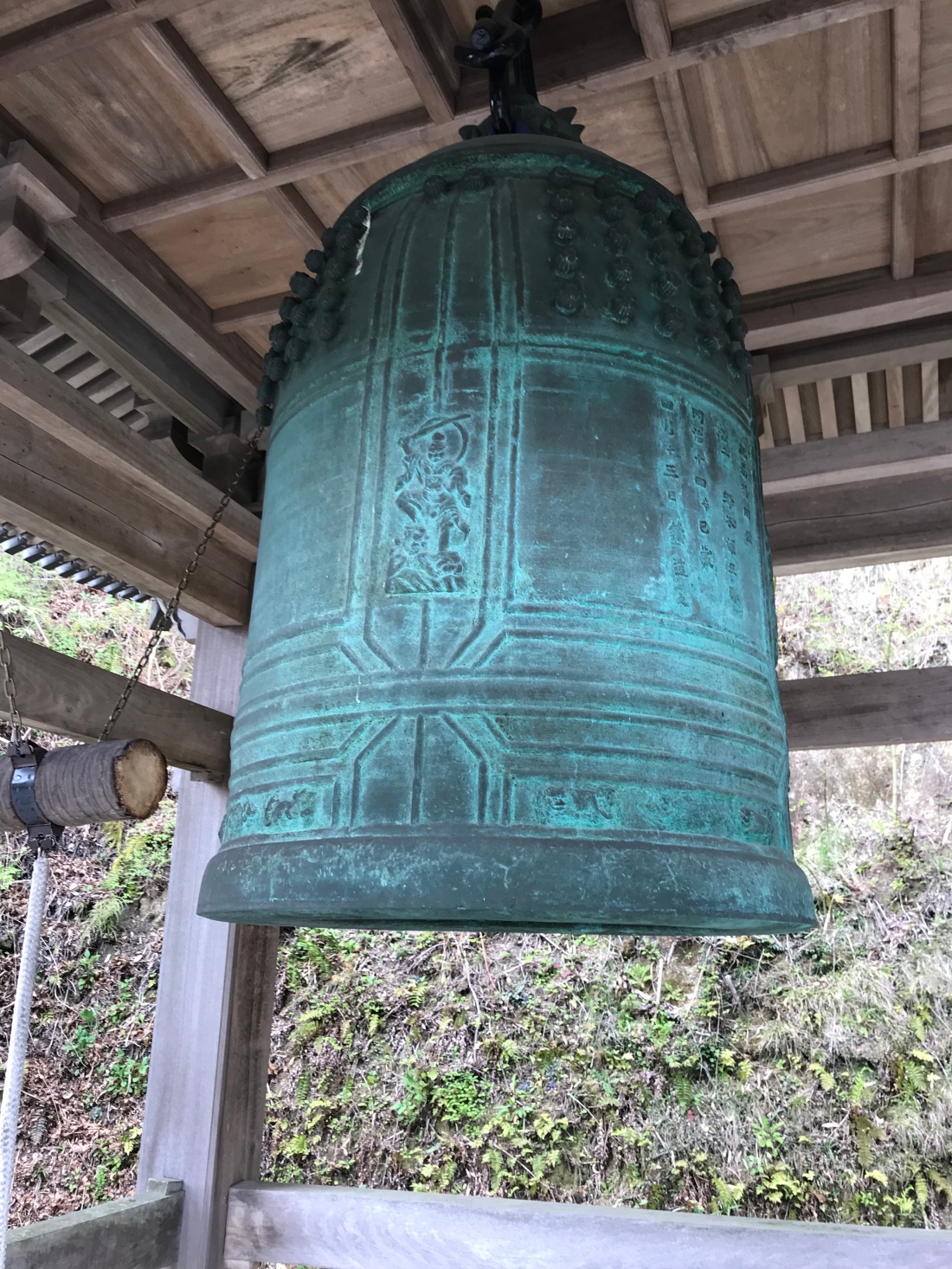 To the right of the daishou is a large display of staffs that pilgrims have left. It costs 1000 yen to leave your staff. I decided from the beginning at Temple 1 that mine will come home with me as a reminder of the journey. 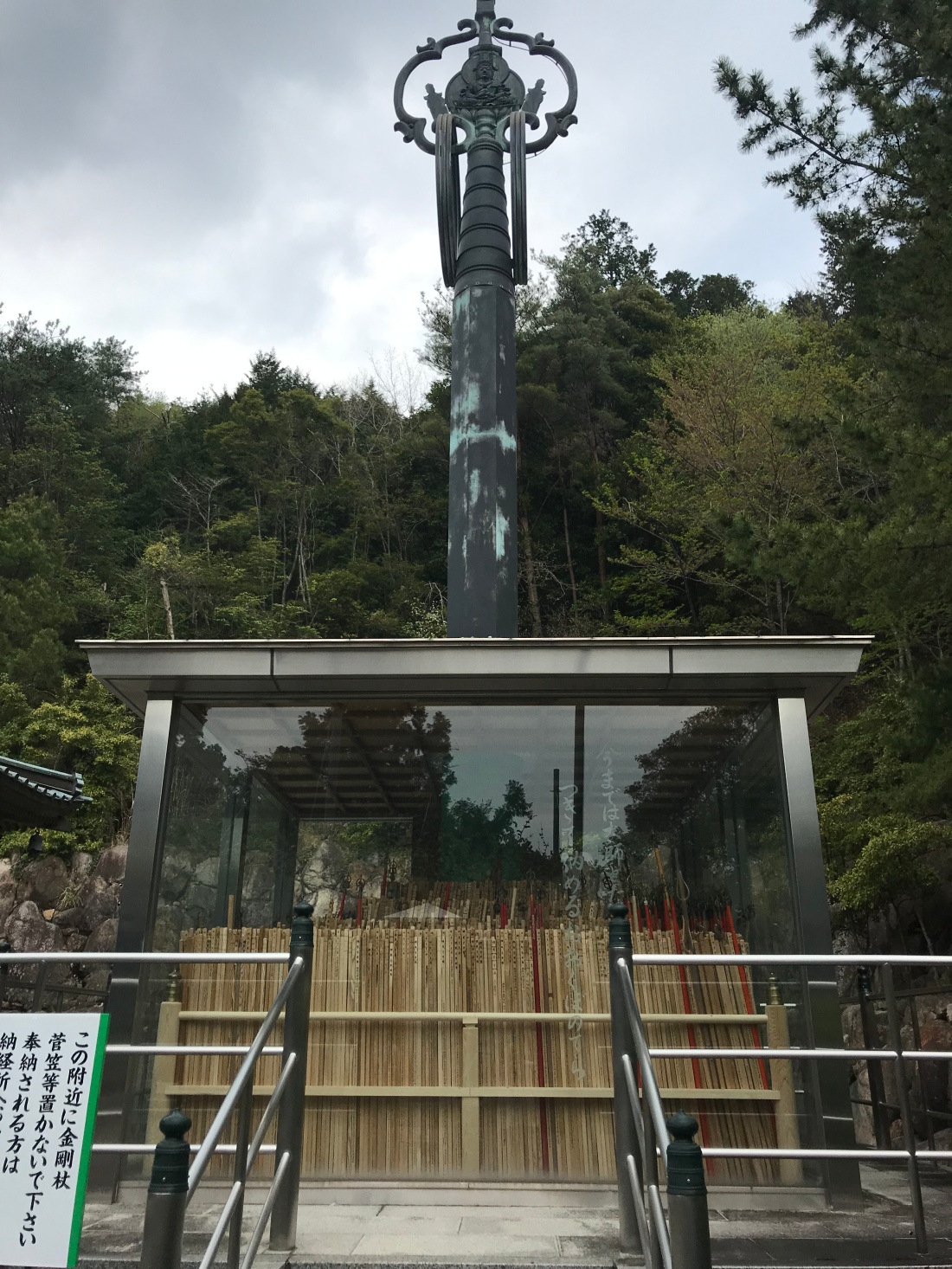 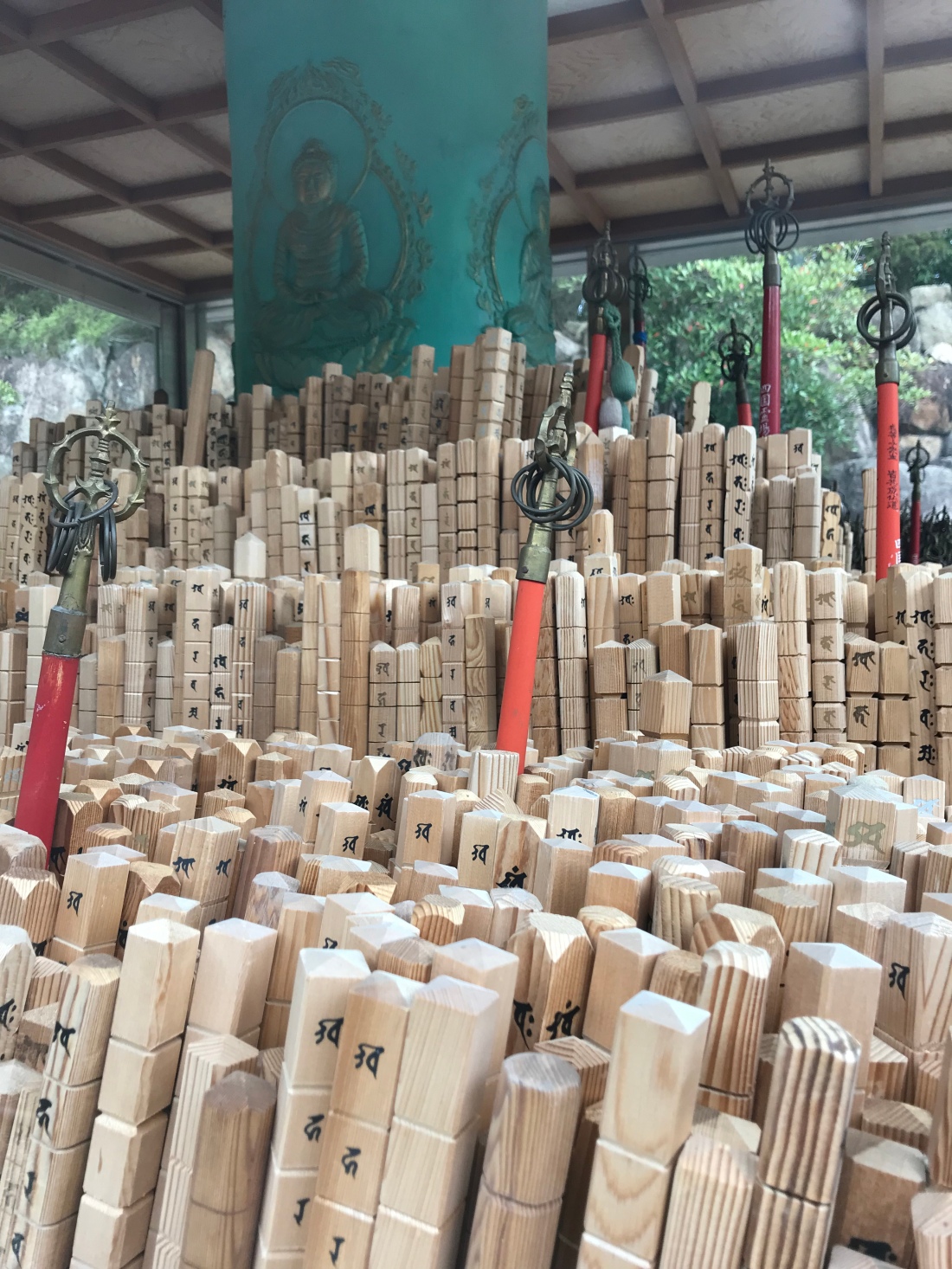 As if right on cue, Christine appeared. She had walked a different route to the top. She was all smiles as I was. We asked Ueno-san to take our photo at the Kukai statue. We had endured the climb to Temple 69 in the pouring rain. We had unexpectedly met several other times on the road. What a fitting way to record our moment at Okuboji. 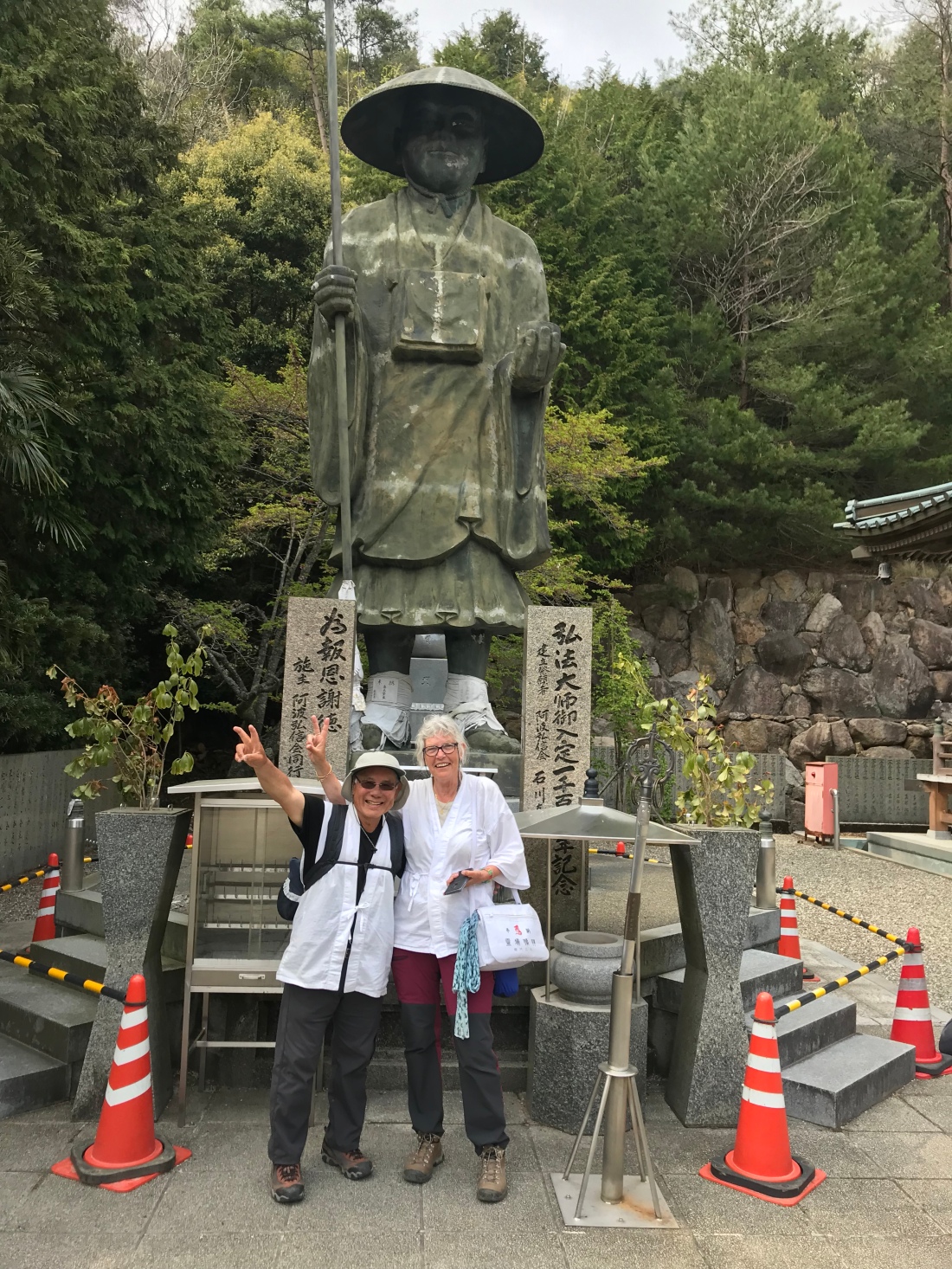 We also had our books signed and stamped. A green stamp was added to commemorate the ending of the Heisei on 30 April when Emperor Akihito abdicates – an interesting point in history to witness while in Japan. 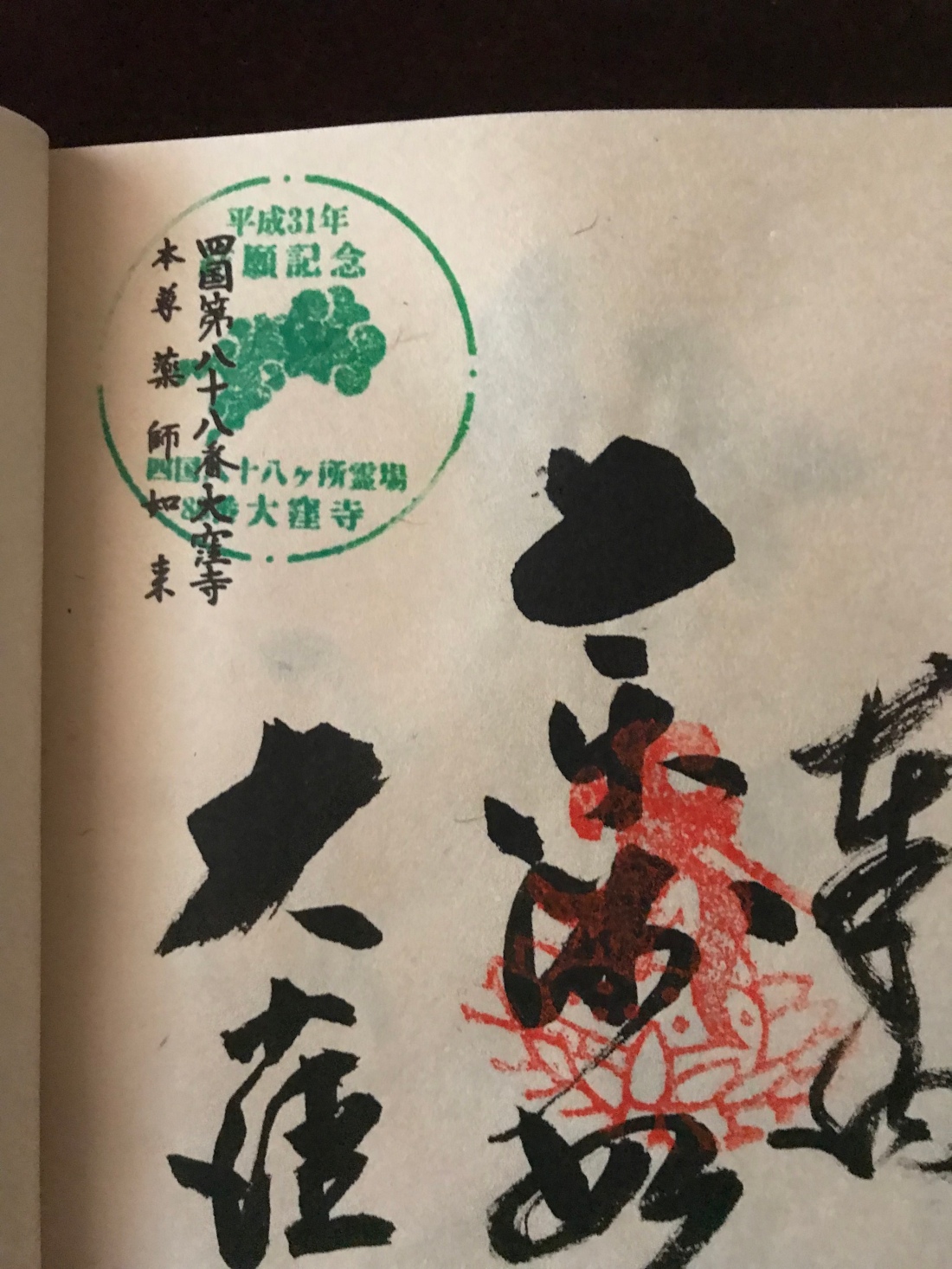 It was time to leave. We said good-bye to Christine who was staying at the only minshuku near Okuboji. Ueno-san and I had another 7 miles to our hotel/onsen down the mountain.

We walked in the beauty of a spring day with its many hues of green. I did not feel the sadness that I had the day and night before. 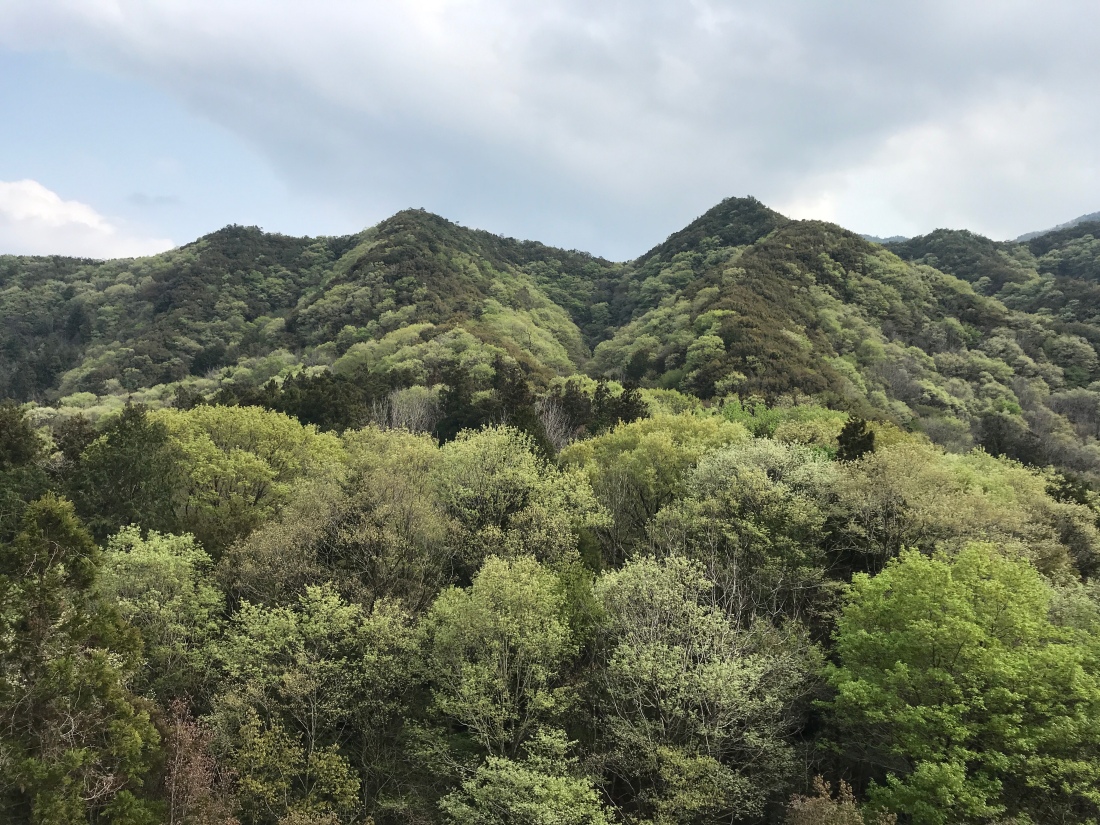 I felt part of a long tradition of ohenro, not just in terms of the rituals but walking in the steps of those who came before. How will I live onward? How will the ohenro affect my thinking and behavior as I return home and into familiar daily life? I don’t have an immediate answer but time will tell. I am grateful to have had the health, time, means, and support to be where I am this morning.